Electric Bicycles: Are They Safe? 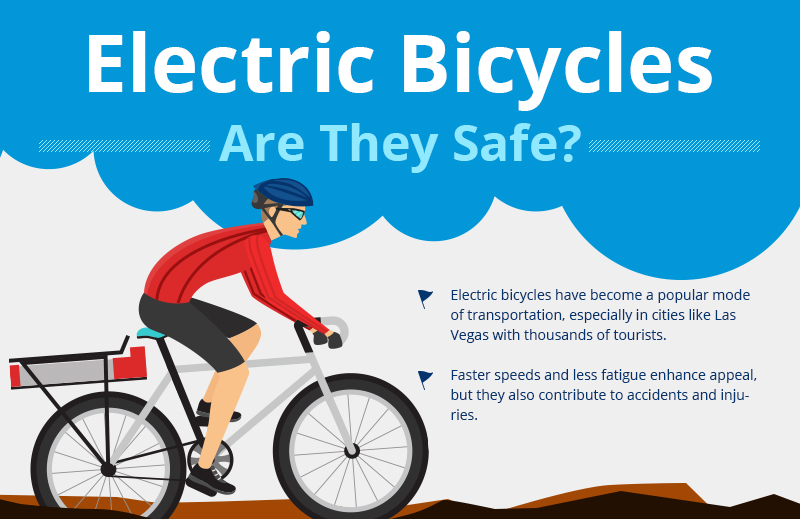 Electric bicycles have become a popular mode of transportation, especially in cities like Las Vegas with thousands of tourists. Faster speeds and less fatigue enhance appeal, but they also contribute to accidents and injuries. For bicycle accidents in Las Vegas, a bicycle accident lawyer Las Vegas may be necessary for personal injury claims.

Many countries, including the United States, have enacted electric bicycle laws to regulate their use and safety. In the U.S., there are federal regulations that govern standards of manufacture and safety requirements of electric bicycles. The Consumer Product Safety Commission (CPSC) regulates and oversees standards and guidelines for electric bicycles to protect the public from unreasonable risks of injuries and fatalities.

According to the U.S. Consumer Product Safety Act, electric tricycles and bicycles meet the definition of low-speed electric products. An electric bicycle is defined as a two or three wheeled vehicle with low-speed power and fully operable pedals. When powered by the 750-watt motor, an electric bicycle can reach a top speed of 20 miles per hour when operated by a rider weighing 170 pounds or less.

While Federal laws govern consumer product regulations for low-speed electric bicycles, state vehicle codes regulate how they are used on public streets. If accidents occur in Nevada, a bicycle accident lawyer Las Vegas may be necessary to interpret and explain state vehicle codes to bicycle accident and injury victims. State codes vary significantly from state to state on the following rules and regulations:

In Nevada, an electric bicycle is identified and typed as a bicycle with a 750-watt low-speed motor, capable of reaching maximum speeds of 20 miles per hour. There are no mandatory requirements for a helmet, license, or minimum operator age. Without mandatory requirements for helmets, licenses, and minimum operator age in Nevada, , electric bicycle accidents are more likely to result in serious injuries or fatalities and the need for a bicycle accident lawyer Las Vegas for personal injury claims.

Although electric bicycles can accelerate to faster speeds than regular bicycles, they are generally allowed to share the same spaces. They are generally allowed to travel in bike lanes and on sidewalks with regular bicycles. For this reason, maximum speed and acceleration is restricted by manufacturers. Although individual state laws regulate electric bicycle restrictions, general safety precautions are encouraged for all operators by manufacturers. General safety precautions include::

Although electric bicycles do have safety hazards, they also have built-in safety features like superior braking systems and strong frames. If riding an electric bicycle at top speed and a car or other object suddenly darts in from of the rider, there are electrical cutoffs that are built into the brake lines. When the brake is pulled, the motor automatically stops spinning. This built-in safety feature has prevented many accidents and serious injuries in car and bicycle collisions. In Nevada, a bicycle accident lawyer Las Vegas can provide legal advice for these types of collisions. Electric bicycles also have full suspension, strong frames and Kevlar tires. Weighing in at an average of 50 pounds, electric bicycles are much stronger and more stable than traditional pedal bicycles. More weight and greater stability equates to more protection and fewer injuries in Nevada bicycle accidents that require assistance from a bicycle accident lawyer Las Vegas.