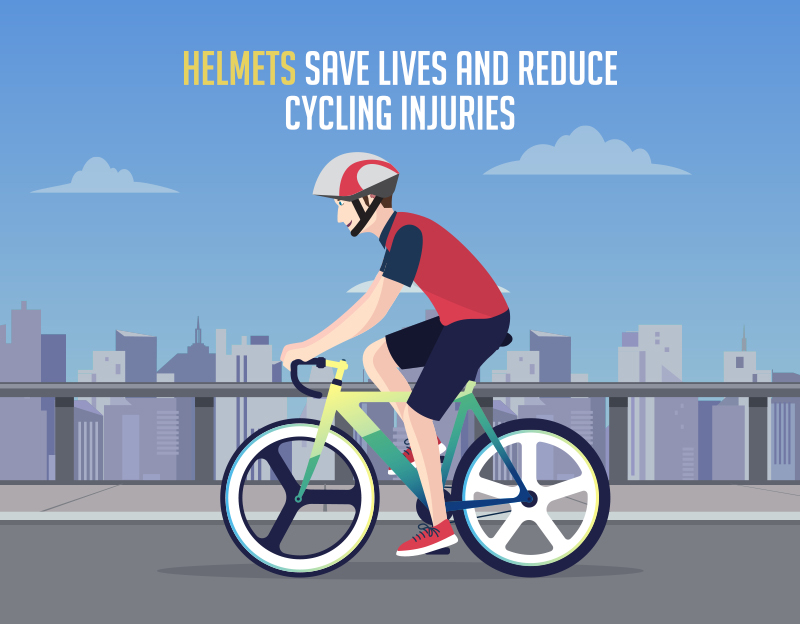 Wearing a bicycle helmet can reduce a bicyclist’s risk of suffering a minor injury by 50% and a serious head injury by nearly 70%. Helmets can also reduce a cyclist’s risk of fatality by 65%. With only two exceptions limited to Indian reservations, Nevada law does not require cyclists to wear helmets. However, the statistics show that these safety devices save lives and reduce a cyclists risk of their name becoming yet another statistic.

Helmet Use Across America

Studies conducted by the CDC from 2001-2003 showed that only 48% of children between the ages of 5-14 wore helmets while riding. In a self-reported study conducted in 2015, this rose to 61%. However, the same study showed that only 42% always wore their helmet.

This study also showed a strong correlation between adult helmet usage and child helmet usage. It showed that when adults always used their helmets, 90% of children followed the adult’s lead and wore their helmet.

Helmet technology has advanced considerably over the years. When an impact with the ground, a vehicle, or fixed object occurs, the foam (typically polystyrene or expanded polypropylene) within the helmet crushes. This helps absorb and dissipate the energy from the collision and reduces the amount of energy transferred to the skull.

Helmet shells are often made from composites. These can include fiberglass, carbon fiber, or plastic. When a collision occurs, the shell keeps the foam intact so that it can absorb the energy of the impact. It also helps transfer the energy throughout the helmet which helps minimize the pressure exerted on the point of impact.

Fatalities & Injuries are on the Rise

In 2015, just over 1,000 cyclists died in cycling accidents. A further 467,000 suffered injuries. It is estimated that these fatalities and injuries cost lifetime income losses and medical expenses exceeding $10 billion.

Nationwide, roughly 7% of traumatic brain injuries are caused by bicycle accidents. Each year, nearly 67,000 people seek treatment in emergency rooms for head injuries. Of these, nearly 27,000 require hospitalization to treat these injuries.

While children and teenagers suffer fewer fatalities than other demographics, they suffer 60% of injuries that require treatment in an emergency room. In fact, cycling accidents cause more injuries that contact sports, trampolines, and other common causes of childhood injuries and fatalities combined. It is estimated that universal helmet usage by children between the ages of 4-15 would prevent between 39,000 to 45,000 head injuries each year.

Helmets Are Just One Part of the Lifesaving Equation

Helmets protect, but don’t prevent accidents. As such, their usage should be combined with other preventative measures. These include fluorescent clothing and reflective stickers that can be attached to the bicycle to increase visibility in low-light conditions.

Active lighting including front lights and rear lights further increases the cyclist’s visibility to motorists and their ability to avoid obstructions in the road.

Numerous parties can be liable for causing a cycling accident and a bicycle accident lawyer can help determine which party or parties are responsible. These can include:

Motorists – Motorists have a duty of care that includes taking extra precautions in areas where cyclists can be expected, such as on city roads or residential neighborhood streets where marked bike lanes, schools, daycare facilities, etc. are present. Speeding and other forms of reckless driving in these areas are negligent actions. Driver’s whose negligent actions put others at risk are liable for the injuries and fatalities their actions cause.

Cyclists – Other cyclists may be liable if their actions cause another rider to crash. For example, swerving, crowding a bike lane, pushing another cyclist off a trail, etc.

Municipalities – Municipalities have a responsibility that includes maintaining roadways, sidewalks, and bike paths in good condition. When an accident is caused by a pothole, uneven surfaces, or obstructed bike lanes, the municipality is liable for the injuries, property damage, and any wrongful death that may occur.

Homeowners/Vehicle Owners – One common cause of cycling accidents are sidewalks and bike lanes blocked by parked vehicles, trash cans, moving containers, etc. Blocking sidewalks and bike lanes are prohibited by law, and those who do so are liable for the accidents and injuries their actions cause. For example, if a cyclist swerves out of a marked bike lane to avoid a parked car and is subsequently hit by oncoming traffic.