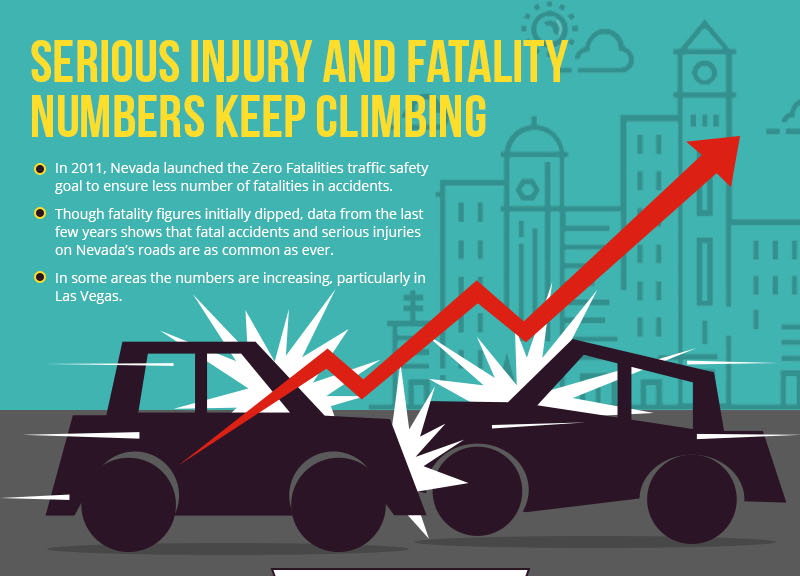 In 2011, Nevada launched the Zero Fatalities traffic safety goal with then Department of Transportation Director, Susan Martinovich declaring that, “One death on Nevada roads is too many…” Though fatality figures initially dipped, data from the last few years shows that fatal accidents and serious injuries on Nevada’s roads are as common as ever. In some areas the numbers are increasing, particularly in Las Vegas.

Fatalities on the rise

Report after report highlights the risk drivers and pedestrians are taking on the roads of Las Vegas daily. As statistics from the Nevada Office of Traffic Safety (NOTS) show, 321 traffic fatalities in 2015 is more than a 10% increase over the 2014 total. That is close to 30% more than last year’s figure for the same period. In almost all categories, road user deaths increased from 2014 to 2015:

For 2016, things are looking worse. Year-to-date numbers show that 50 people have already died in auto collisions. Over that period, vehicle occupant deaths are up 33%, pedestrian deaths are up 15%, and cyclist deaths have skyrocketed from just three to 12.

Cost of injury continues to grow

Looking at the number of injuries resulting from automobile accidents, the impact expands from hundreds to thousands of individual lives disrupted. During 2014, the Centers for Disease Control estimates that for every person killed in a car crash, there were eight people hospitalized and about 100 people evaluated, treated and released from the hospital. Any Las Vegas car accident lawyer will tell you: the true cost of injuries extends far beyond the initial hospital bills. Additional cost considerations include collision repair, missed time from work and school, therapy and other treatment costs, as well as the cost of damage to public facilities and private property.

Making headway in some areas

While the figures for fatalities and serious injuries on the whole is staggering, one should take the time to acknowledge success where safety has been improved. Overall, the number of serious injuries and deaths per 100 miles driven has fallen. The real issue behind the ongoing rise in road accident death and injury may be the fact that Nevada’s road users are putting more miles on their vehicles.

As mentioned, deaths due to drunk driving have fallen. Year-to-date information from NOTS shows a 30% drop in drunk driving deaths and incidents for Clark county so far in 2016. The other success story on Las Vegas roads is the apparent decrease in motorcycle accidents and deaths – year on year data for 2016 shows a 75% improvement in the fatality rate for bikers.

Where a car accident lawyer Las Vegas is concerned, Las Vegas is peppered with variables that can lead to serious injuries and fatalities in collisions. The combination of high visitor numbers, multiple roadside attractions, a population boom, and increasing driver distraction in the metro area can be punishing for drivers, passengers and all-too-often, pedestrians. While intoxication still plays a role in car accident injury and death, the number of intoxication-related accidents has dropped in recent years.  At the same time, incidents where drivers and/or passengers in car crashes are killed or injured due to improper seatbelt use continue to happen.

What can be done

The Zero Fatalities Initiative has improved resources for road safety across the board. By providing awareness campaigns, better education resources and directing road improvements, Nevada’s driving culture has an improved focus on safety. But all road users can do more to bolster safety: