The Risks of Riding are Very Real 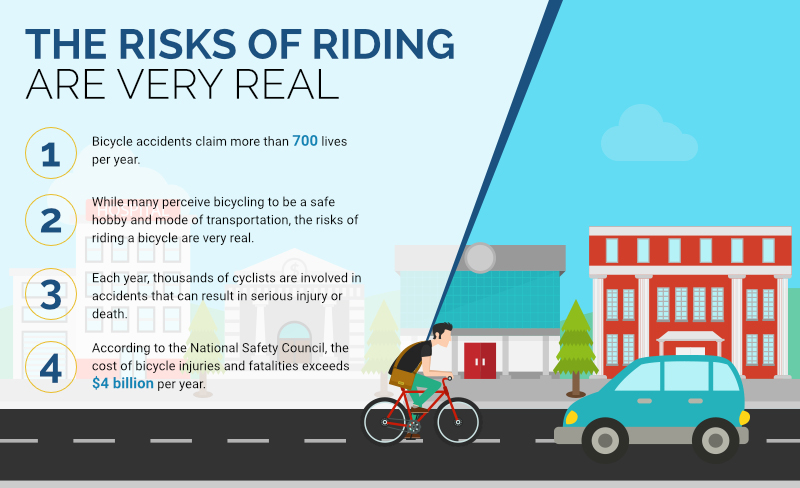 Bicycle accidents claim more than 700 lives per year. While many perceive bicycling to be a safe hobby and mode of transportation, the risks of riding a bicycle are very real. Each year, thousands of cyclists are involved in accidents that can result in serious injury or death. According to the National Safety Council, the cost of bicycle injuries and fatalities exceeds $4 billion per year.

The average age of cyclists killed in collisions with motor vehicles is 45 years old. This is up from the age of 39 in 2004, and 32 in 1998. These accident rates show that cycling is becoming increasingly dangerous for older cyclists who use their bikes for both commuting and recreation.

Conversely, cycling is becoming safer for younger riders. In 2014, only 50 cyclists under the age of 14 died. This represents 7% of the total number of cyclists killed that year. A further 6,000 riders within this age demographic experienced significant injuries.

88% of cycling fatalities are male, and 71% of these fatalities occur in urban areas where congested traffic, busy intersections, and unclearly marked bike lanes post considerable risks to cyclists.

Of the accidents that took place in 2013, 56% took place on roads. The remainder took place on bike paths, within parking lots, or on trails away from main traffic arteries.

A 2012 study conducted by the National Highway Traffic Safety Administration showed that 29% of injuries occurred when cyclists were struck by a motor vehicle. 17% were caused by falls, and 13% were caused by poorly maintained roads and sidewalks. These statistics show that motorists and poorly maintained infrastructure are the greatest risks cyclists face on the road. Moreover, these national statistics are in line with similar statistics collected by the Nevada Department of Transportation.

Cyclists have little protection if they are involved in an accident. While cyclists can protect their head, arms, and shoulders with helmets and pads, the majority of an individual’s body is exposed in an accident. Thus, it is not surprising that acute trauma is a common injury. Acute trauma can occur to the abdomen, neck, or extremities. It may include “road rash,” lacerations, fractures, or strains. These injuries can cause temporary or permanent loss of movement and limb function.

Cyclists are also at significant risk of head trauma, spinal cord injuries, or permanent neurological damage. It’s estimated that wearing a helmet can reduce the risk of these injuries by as much as 85%. Thus, while they can help protect cyclists, helmets do not eliminate the risk of suffering these life changing injuries.

However, wearing a helmet most certainly can save a life and the National Highway Traffic Administration estimates that nine out of every ten cyclists who are killed in accidents are not wearing a helmet at the time of their crash. Even so, they further estimate that only 20 to 25% of cyclists routinely wear helmets while they are out riding.

Fatality Rates are Declining but Injuries are Increasing

Fortunately, fatality rates appear to be declining. From 2013 to 2014, the number of fatalities declined by 3%. This decline is due in part to better protective equipment, improved signage and road marking, and increased awareness on the part of both drivers and cyclists.

Thus, these statistics show that cyclists and motorists must remain vigilant. With more cyclists and motorists sharing the road than ever before, bicycle accident lawyers in Las Vegas know that the potential for collisions has never been greater. While safety equipment and improved roads are saving lives, they are not providing adequate protection against serious injuries.

Drinking and Cycling are a Deadly Combination

In 2013, nearly 24% of cyclists who were involved in fatality accidents had blood alcohol contents that were above the legal limit. Indeed, it is clear that riding and cycling are equally as dangerous as drinking and driving. Nevada law allows cyclists to ride a bicycle while under the influence, however, they do so at considerable risk to their health and safety.

In 2013, Nevada posted a rate of 1.6 cyclist fatalities per 1 million residents. Between 2010 and 2013, 13 cyclists lost their lives on Nevada roads. This low per capita rate places Nevada as the 26th most dangerous state in America for cyclists. However, safer does not mean that cycling in the state is without risk.