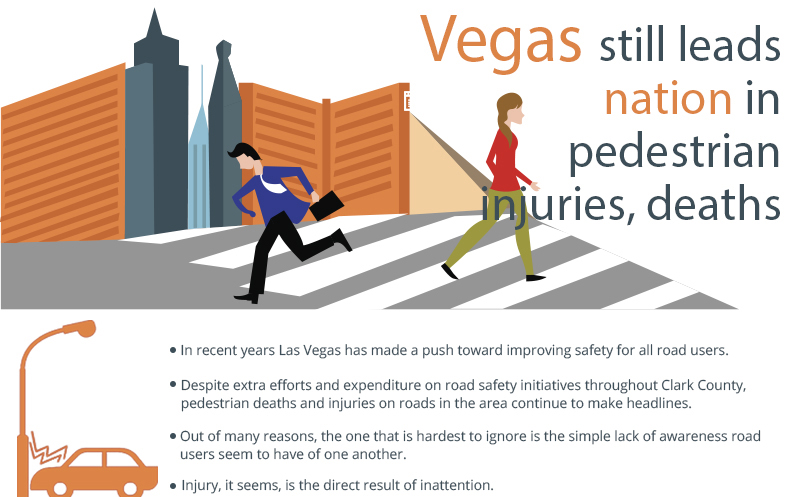 In recent years Las Vegas has made a push toward improving safety for all road users. Despite extra efforts and expenditure on road safety initiatives throughout Clark County, pedestrian deaths and injuries on roads in the area continue to make headlines. There are many reasons for this, but the one that is hardest to ignore is the simple lack of awareness road users seem to have of one another. Injury, it seems, is the direct result of inattention.

Distraction comes in many forms for road users. Cell phone use, integrated technology and other innovations designed to help drivers more seamlessly operate can cause distractions. According to CDC data from 2011, 69% of US drivers admit to talking on their cell phone while driving. Children can cause distractions. Scenery can cause distractions. Pedestrians themselves can cause distractions – and lion’s share of initiatives brought forth by the state are focused on improving awareness and eliminating distraction. In some cases, Las Vegas itself may be the problem. People are here from out of town, carousing on broad streets at higher than typical residential speeds. Unfortunately, personal injury lawyers in Las Vegas can attest to the number of pedestrians they continue to see seeking compensation following an accident with a distracted driver.

What the numbers say

Las Vegas is America’s 29th largest city, yet pedestrians on the roads here are more vulnerable than those in the nations busiest cities. In 2012, more pedestrians died in Las Vegas than Manhattan – a population over twice the size. The staggering thing is that despite the State’s best efforts, pedestrian deaths continue to climb. Between 2008 and 2011, there were 140 car-related pedestrian deaths. In 2014 alone 93 pedestrians died in accidents with cars. The data for 2015 has yet to be finalized, but indications are the final figure will be around 120.

That figure makes a mockery of the Zero Fatalities initiative the state of Nevada launched in 2011. The Zero Fatalities awareness campaign has six key tenets, four of which have direct links to improving pedestrian road safety:

The other points in the framework are focused on driver safety and motorcycle safety. In all cases, the policies are designed to raise awareness – not create new penalties for those who make poor decisions regarding road safety.

Pedestrians are still at risk

While the state continues to make inroads with local drivers, raising awareness among people who live locally and work on the Strip, distractions and unfamiliarity with the LV road system breeds havoc.

In December, a tourist made headlines for plowing into a crowd on the sidewalk. The driver swerved in and out of the crowd, but did not stop until more than two dozen people had been maimed and one person lay dead on South Las Vegas Boulevard. The driver turned herself in around the corner from the incident, and showed no overt signs of being intoxicated, according to police. While there was no clear reason for the attack, the deliberate nature of the driver’s actions was a new cause for concern.

This is an extreme example of the risk pedestrians face. However, any personal injury lawyer in Las Vegas will confirm: being aware of your surroundings and obeying the laws of the road is not enough to protect pedestrian traffic. More must be done to create safe spaces for pedestrians to maneuver, particularly in areas where pedestrian density and traffic congestion converge.

Continual calls for more to be done to protect pedestrians in Las Vegas are unlikely to stop. Personal injury lawyers spend a good deal of time assessing the causes of pedestrian accidents, and rarely is it the victim’s fault. However, many caution that pedestrians in Las Vegas’s heavily visited areas should be increasingly aware of their rights as road users. While no one would advocate that you cross with the light when traffic continues to stream through after it’s gone red, being aware which type of crossings are available in the areas you plan to visit can help them avoid confusion and accidents.

Knowing the rules of the road, sharpening awareness for both sides, and moving toward more stringent enforcement of penalties is the clear course the city must take to address the ongoing increase in Las Vegas pedestrian injuries and deaths.